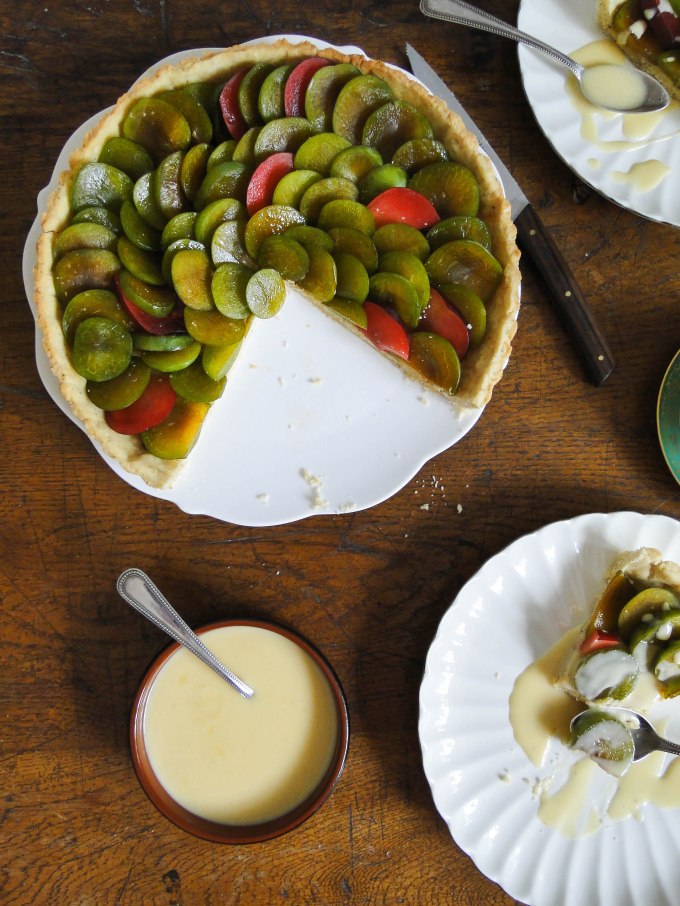 There is a moment each summer, right at the height of it, when you first realize it won´t last forever. When it comes to food, at least to me, that moment is marked by the appearance of the plum. For someone who grew up in Germany, plum cakes belong to late summer days like thunderstorms, my birthday and the very first fallen leaf you spot on the ground.

The plum cakes of my childhood were simple, rustic tray bakes or tarts, covered with streusel and flaked almonds, and crowned with dollops of whipped cream on a special day. If I was very lucky, there was some marzipan involved in the topping, adding a hint of almondy sweetness to the fruit that, in some German summers, would have gained from an extra dose of sunshine. In exchange, the acidic plums tame the sweetness of the marzipan – a win-win of flavors to say the least, a heavenly match if you ask me. 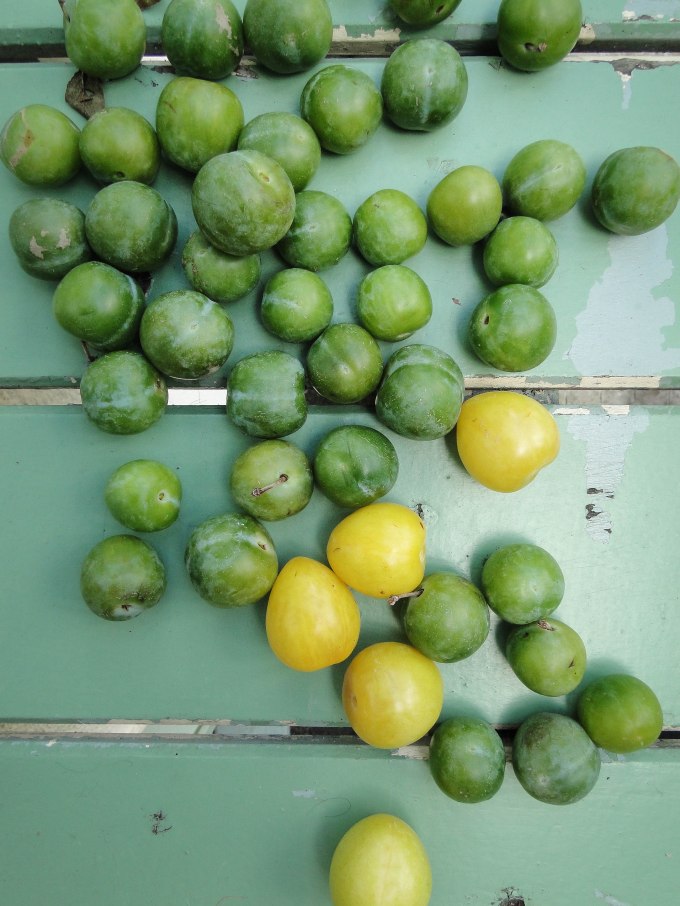 That kind of memories came to my mind when I brought home the first plums a few days ago: Yellow and red ones, as well as the green Reine Claude plums (greengages) that turned out the most succulent of the three and thus seemed best for what I had thought of. The idea being a tart and a marzipan sauce to be drizzled on top, I wanted a not so sweet, but flaky crust which is always a compelling case for using salted butter.

Disappointingly, but then again not so surprisingly for a first try, the flavors didn´t really melt together. A modification of the crust seemed quite promising, but the solution was found in a jar of apple compote sitting in the fridge, waiting in vain for my son to eat it. He had requested it the day before, and since he´s such a proud kitchen apprentice these days, dicing and slicing so eagerly with one of the not so sharp kitchen knifes, I couldn´t say no. And luckily, I didn´t. A layer of the compote underneath the plums (that aren´t baked, by the way) added fruitiness and went so well with the salted butter, the sourish plums and the sauce – just what was missing.

1. Crust:
Combine all ingredients for the crust until you obtain a homogenous dough. Cover with cling film and leave to rest in the refrigerator for at least one hour.

Take tart shell out of the oven and leave to cool on a wire wrack.

2. Apple compote:
In a small saucepan, heat apple chunks with sugar and cinnamon over low to medium heat, checking from time to time so they don´t burn. When soft enough (after about 20 minutes, depending on chunk size), mash apples with the back of a fork or using a potato masher. Leave to cool. Makes 1 small jar.

3. Marzipan sauce:
Grate the marzipan. In a saucepan, melt butter over medium heat. Gradually add flour (preferrably sifted), whisking away to avoid lumps. Pour the milk, still whisking. Reduce heat to medium low and allow mixture to thicken like a custard. Stir in the egg yolks one by one, then the Amaretto and vanilla essence. Reduce heat to low, add the grated marzipan and stir until dissolved. Leave to cool.

4. To assemble:
Once tart shell and sauce have cooled, slice the plums vertically, discarding the inner part with the kernel. Place tart shell on a serving plate. Spread a layer of apple compote, keep the rest for later use. Arrange plum slices in a concentric manner, working your way to the center.

Serve with a good drizzle of marzipan sauce.